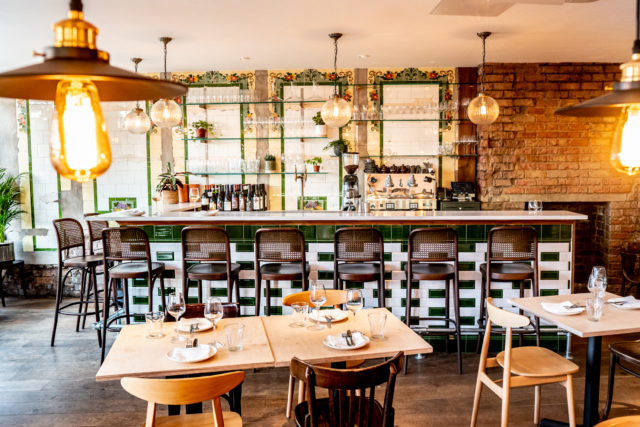 The concept: In 1994, Fergus Henderson and Trevor Gulliver began plugging the nose-to-tail approach at London restaurant St John. Fast forward 25 years and something of a more pisciform nature is gaining momentum in the capital.

The scales and all approach isn’t without its proponents. Chef Tom Brown serves up the likes of monkfish liver torchon and cod head terrine at his restaurant Cornerstone in Hackney Wick, while chef and restaurateur Rick Stein has extolled the virtues of bottarga, a salted and cured fish roe, which he devoured in hastily-cut slivers on his BBC series Mediterranean Escapes. That said, a restaurant like Lyon’s, which deliberately highlights under-valued fish cuts, is still a rare enough concept to merit intrigue.

Billed as a fin-to-tail champion, it is the brainchild of South Africa-born Anthony Lyon. Since moving to the UK over 20 years ago, Anthony has worked in the front of house at many of the capital’s most recognised restaurants. With stints as general manager at the likes Hix Soho and The Wolseley, his experience shows, and when faced with the option of buying a house or opening his own restaurant, he decided to take the plunge on the latter.

He is joined by friend and exuberant sommelier Kelvin McCabe, who along with his job as wine buyer and beverage director at Adam Handling’s growing throng of restaurants, has found time to tackle the wine list at Lyon’s.

Head chef Talia Prince, who also hails from South Africa, handles proceedings in the tiny yet well-equipped kitchen. Trained at the Cordon Bleu in Cape Town, Prince worked her way up through the ranks at the critically acclaimed The Foodbarn Restaurant, before moving to UK. With roles at Le Gavroche and The Fat Duck gracing her CV, for the past two years Prince has worked as a private chef while bringing up her twin boys.

Now she takes to the pass at neighbourhood restaurant Lyon’s, a welcome addition to the swirling pavements of red-bricked Crouch End high street – an area not short of hip bars and independent eateries.

The décor: With the original dark green tiles and fireplace lovingly restored, Lyon’s combines bare brick walls and warm low-hanging lighting with ornate Victorian charm. The glass-fronted Park Road site has 46 main restaurant covers with 16 window and bar seats reserved for walk-ins. The walls are flanked with green leather banquettes and a blackboard is scrawled with the wines available by-the-glass and the current restaurant menu.

On my visit, a Tuesday evening during which the restaurant was almost full and diners were still traipsing in at 9:30pm, the interior felt welcoming and cosy rather than dark or cramped.

The food: Specialising in seafood, Lyon’s draws inspiration from Japan, a country in which fish off-cuts are celebrated and dishes are enhanced by the addition of tobiko (flying fish roe). Vegetarian and meat dishes, however, also grace the menu, delivering the full omnivorous experience.

We began with a selection of oysters: the supremely saline Carlingford oyster, sourced from Carlingford Lough in Ireland, and the meaty Ostra Regal, which also originates from the emerald isle. They came both with and without a dressing. The Carlingfords were enhanced by finely chopped cucumber and melon, while the Ostra Regals came with smoky but not overpowering wakame seaweed mayonnaise.

Also on the menu were crisp salt cod fritters served with another mayo, this time made with the unusual combination of vanilla and wasabi. Vanilla can be a divisive flavour, and for me it didn’t quite work here, but I devoured the fritters all the same. A bowl of juicy, shell-on prawns, accompanied by the enticing whiff of smoked tomatoes and confit garlic, was also brought forth. Mercifully the taste was just as good as the aroma.

One of the star plates on the menu was a winter warmer of a risotto, made with pearl barley for added bite. Flavoured with celeriac, hazelnut, lashings of Parmesan and small chunks of browned, melt-in-the-mouth bone marrow, it was a cuddle in bowl form.

My favourite dish, however, was a lighter affair. The stonebass tartare, flavoured with ponzu and yuzukosho – a Japanese citrus-chile paste – was enhanced by the addition of tomatoes, spring onions and tiny tobiko pearls. The tobiko pop in your mouth, releasing an extra salty-sweet dimension, which was inspired.

Signature dish: The signature dish at Lyon’s is undoubtedly the miso fish collar with seaweed mayo. While usually either thrown away or dumped in the stock pot, Anthony explains that this cut is considered a delicacy in Japan. A particularly fatty part of the fish, the flesh is both moist and meaty, coming away from the bone in firm flakes.

Lyon’s marinates its fish collars in miso, ginger and chilli for 24 hours before cooking. The miso acts as a seasoning rather than a dominant flavour, with the ginger and chilli providing some heat. Much like a skate wing, make sure you flip the collar over to get at the other side. Scraping every last bit off the bone is essential.

The drinks: You know you’re in for a treat when Kelvin puts his name to something. A rare London-born sommelier, Kelvin has handled the wine lists at restaurants in the capital for almost 15 years, holding head somm roles at Yauatcha, Zuma and Roka before joining ex-Masterchef: The Professionals contestant Adam Handling at his restaurants. This year he won both Wine List Confidential‘s Sommelier of the Year and was responsible for the number one wine list in London.

Beginning with a glass of 2014 sparkling rosé from Ambriel in West Sussex, Kelvin proceeded to pair the oysters with Covi Jerez’s Mira la Mar Manzanilla Sherry. While Chablis or Champagne are often favoured in this situation, Kelvin believes Sherry is remarkably adaptable, and the delicate, almond scented Manzanilla came up trumps.

Who to know: Owner Anthony is well worth seeking out. He’s spent time in Japan and explains the ingredients used in every dish, and their purpose, with ease. Play your cards right and he may through in some signature dance moves…

Don’t leave without: trying the pudding. We opted for the chocolate miso marquise served with lime zest and sour cream. The chocolate was rich without being sickly, the cream and fresh citrus cutting through the dense marquise. The thyme ice cream sandwich was likewise well-balanced. Thyme can often dominate but the ice cream had just the right amount. Encased within two sheets of thin, crispy pastry, the dish was completed with the addition of a pickled pear. While this didn’t go particularly well with the ice cream, it was an intriguing flavour, one that would work well chopped through salads or perhaps accompanying a meat dish.

Last word: Lyon’s has the holy trinity that all restaurants hope to deliver: good food, wine and service. The dishes are simple and uncomplicated without being something that you could easily recreate at home. A neighbourhood restaurant at its heart, it was encouraging to see Lyon’s almost full on a Tuesday evening, especially in a street not lacking enticing bars and restaurants.

While Crouch End might not be on your radar, it is but a short bus ride from Finsbury Park and regular Thameslink trains to the city centre. If a Surrey dweller can make the trek on a school night, so should you.