WLC’s resident gourmand, Lucy Shaw, indulges in one of the most decadent dinners of her life at The Dorchester’s new look Grill, where she is charmed by a lobster thermidor tart. 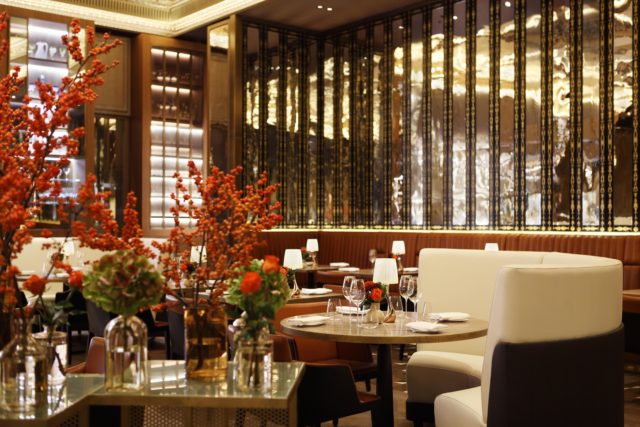 The concept: Once the preserve of septuagenarians in red trousers and kipper ties dangling dangerously close to the oxtail soup, the humble grill, with its often questionable interiors and uncouth carpets, is having a moment in the capital.

Back in 2015 The Savoy made history by employing Kim Woodward as its first female chef in the institution’s 126-year history, and just last month The Connaught announced that it would be re-opening its grill early next year after a 20-year hiatus.

Another of London’s grand hotels – The Dorchester on Park Lane – has given its grill a makeover and an exciting new direction, having just employed the restaurant’s youngest head chef in its 88-year history – baby-faced 26-year-old Tom Booton, who has bold plans to shake things up and inject new life into the somewhat deflated site.

The décor: Helping Tom in his plight to remix and reignite The Grill are its shiny new interiors, which include a destination cocktail bar and a dessert bar, prettified with a plethora of copper watering cans sprouting with foliage, where guests are encouraged to chat to the pastry chefs while they whip up delectable puds.

Taking centre stage in the room is a giant golden chandelier that looks like it’s on fire. Lacking windows, The Grill makes clever use of mirrors to add light and give the perception of space.

The black and gold mirrors on the far wall are exotic and Egyptian in feel, while cream crescent moon-shaped booths, tiny table lamps with pleated shades and terracotta banquettes add to the room’s retro luxury look.

In keeping with the more relaxed feel of the new look restaurant, which reopened last month, the waiting staff have ditched their suits and ties in favour of casual shirts and Chelsea boots. Their manner is equally light and effortless.

A word of warning for those of a delicate disposition – the acoustics are such that you will be privy to your neighbours’ conversations, which could be a good or bad thing depending on how interesting your own company is.

The food: What Prince Harry lookalike Booton lacks in years, he makes up for in experience, having been plucked by The Dorchester from Alyn Williams at The Westbury, where he was head chef.

Prior to that, after clocking up time at Pied à Terre and L’Autre Pied, followed by stints abroad in Iceland, Denmark and New York, Booton worked under Ollie Dabbous for a year as his sous chef at Dabbous’ eponymous Fitzrovia restaurant.

Respectful of the restaurant’s heritage, Booton isn’t reinventing the wheel. Keen to champion British producers, his mackerel hails from Cornwall, beef from Cumbria and chicken from Norfolk. Having learnt how to cook the classics, Booton is confident enough to give them playful twists.

His perfectly spherical, wonderfully crunchy Scotch eggs are stuffed with minced prawn and served atop a pool of warm tartare sauce and pickled gherkin – a trick he may have learnt from Nathan Outlaw, who serves his upmarket version of fish ‘n’ chips at Siren at The Goring with warm tartare sauce.

His beef Wellington for two meanwhile, is a beautifully latticed glossy globe that would make The Holborn Dining Room’s pie wizard, Callum Franklin, proud. From my first mouthful it was clear that we were in the hands of a hugely talented chef.

My simple sounding beetroot starter was a pretty parcel of wafer-thin folds housing a flavour bomb of ricotta, pecans and smoked sturgeon, which was a joy to eat – the smokiness of the sturgeon mingling alluringly with the creamy ricotta, sweet crunch of the pecans and earthiness of the beetroot.

Booton is so unafraid of punchy flavours it feels like your taste buds have been dialled up, so that every morsel seems turbocharged with intensity.

Signature dishes: The boldness of Booton’s flavours is apparent from the get-go. His stout bread is served with freshly churned chive butter and tiny cubes of dangerously moreish black pudding.

Set to become a future classic, his signature dish is the lobster thermidor tart, which is as pretty as it is tasty. A perfectly pink glistening lobster tail rests atop the frilly tart, made with crumbly, buttery pastry that is among the best I’ve ever had, its intensely savoury taste reminding me fondly of cheese straws. And if that wasn’t decadent enough, the ensemble is finished with a generous glug of lobster bisque, creating a sensational celebration of the sea.

No trip to The Grill would be complete without trying Tom’s chips. Be sure to order your own portion, or you’ll end up fighting over them. Standing tall like golden soldiers in a tiny grey Le Creuset dish, they give Heston’s triple cooked chips serious competition.

Divinely crunchy on the outside and impossibly fluffy in the middle, when dipped in the accompanying pot of warm béarnaise the combination was so heavenly it almost made me weep.

The drinks: If you’re not in a rush, it’s worth starting the evening with a cocktail at the bar. Head mixologist, Lucia Montanelli, works with flavours from her native Italy in her appetite-whetting apéritifs like the Gentleman Tom, made with Old Tom gin, Punt e Mes, Chinotto and Maraschino.

On the wine front, we found the by the glass selection slightly on the small and uninspiring side, and would have loved to have seen more wines on pour via Coravin.

It was great to spot a pair of English fizzes on by the glass, along with urban winey London Cru’s sprightly Bacchus. The two wine highlights of the night, however, were higher up the price ladder. The first, an apricot-scented, waxy-textured 2017 Guigal Condrieu, was thoroughly charming both on its own and as a pairing for the prawn Scotch egg.

The second, Domaine Bernard Moreau et Fils Chassagne-Montrachet 2015, offered elegant aromas of honeysuckle, peach, toasted nuts and white flowers, its lifted acidity cutting through the richness of the lobster thermidor tart. For those seeking a fine red, Margaux de Château Margaux 2011 is on pour by the glass for £24.

Who to know: Look out for bespectacled bartender Miles, who will be only too happy to shake you up his signature serve, the wonderfully refreshing, peachy hued New Classic, which blends Tanqueray No. Ten gin, Aperol, yuzu and Grand Marnier.

What could be done better: While I found the food sublime, such decadence comes at a price, and if I have one criticism it’s that the dishes were relentlessly rich.

Balance is essential to everything in life and some of the plates were so punchy they were lacking in light and shade and I was left crying out for some citrus, vinegar or salad leaves to cut through all the cream and fat.

I admire Booton’s bravado in working with such bold flavours, but a little more freshness wouldn’t go amiss.

Don’t leave without: Swinging by the dessert bar (if you have room). Booton is proud of his puds, and justifiably so. His playful twist on a Double Decker defeated me with its richness, but I loved the flavours in his retro banoffee tart with roasted banana ice cream. A little too creamy for my liking, the banana and toffee underneath were worth rooting around for, though in retrospect, this last act of indulgence was probably my undoing.

Last word: Tom Booton is a wildly talented chef and clearly one to watch. His dishes are among the most exciting and extravagant I’ve enjoyed all year and I can’t wait to see what he does next. I wouldn’t want him to tame his desire to work with dynamic flavours, but if he can learn to balance these with more subtle, lighter touches, then his food will be up there with the country’s best chefs.

With Tom’s arrival and the makeover that came with it, The Grill has been given a new lease of life, turning it from a slightly staid and forgotten about place into an energetic and exciting space where timeless classics are respectfully remixed for a millennial audience that expects to be entertained when they eat out.