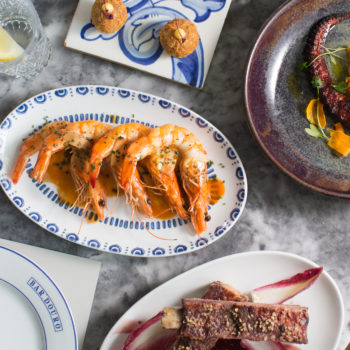 Davies and Brook, Daniel Humm’s much anticipated London opening, is doing things a little differently on the wine front. Wine director, Gabriel Di Bella, told the drinks business that the restaurant is using wine management software BinWise – the first UK restaurant to use the tool, which was developed in the US. Humm’s Eleven Madison Park has used the software for some time to manage its 4,800 bin wine list.

Di Bella says that while it has its limits, the tool allows him to do all his stock input and generate barcodes for every single bottle of wine in the restaurant.

He said the software helps “reduce inventory time drastically” and, as it can be linked to the restaurant’s point of sale system, automatically alerts him to when a wine goes out of stock. “It’s everything linked in one platform,” he said.

28°-50° Wine Bar & Kitchen Covent Garden: Restaurant and wine specialists 28°-50° have opened a new site on Upper St Martin’s Lane in London’s Covent Garden. The 180-cover site will serve up brasserie-style food and is part of a new foodie hub called The Yards. The new site will house a dedicated Champagne bar and a wine room for private dining.

Lost Society Putney: Lost Society is opening a bar in Putney following on from the success of its relaunch in Battersea. Due to open in February 2020, the interior has been designed by Casa Jaguar Design and will combine “industrial glam” with “plenty of botanicals”. There will be an open-plan seating area with velvet furniture, while the menu will consist of a selection of in-house cocktails, craft beer and food.

Bar Douro City: At the end of this month, Portuguese wine bar and restaurant Bar Douro will open its second site in Finsbury Avenue in Broadgate, London. Bringing its regional wine and contemporary take on Portuguese classics, Bar Douro will now have sites north and south of the river. Housed in a Grade II-listed building, like its sister site in Flat Iron, Bar Douro City will be adorned with hand-painted Portuguese tiles, but will have a larger floor space than the Flat Iron Square site. Expect dishes such as Croquetes de Alheira with smoked sausage, sucking pig sandwich in Bolo do Caco and squash with homemade requeijão.

Ampéli: New wine-focused restaurant Ampéli opened its doors on Charlotte Street in London this week. Championing Greek wines, the list was compiled by Yiannis Karakasis MW. Called the ‘Indigenous List’ the wine offering is led by variety and focuses on Greece’s bounty of native grapes. There are sections devoted to Assyrtiko and native reds such as Agiorgitiko from the Peloponnese, Xinomavro from Naoussa, Limniona from Thessaly and Limnio from Thrace. The end of the list focuses on low intervention wines, including a couple of amphora-fermented orange wines. Head chef Oren Goldfeld, who previously worked at Ottolenghi’s Nopi, will serve up dishes that pair perfectly with the wines, including feta saganaki with tomato jam; okra and goat’s cheese fritters; and smoked cod’s roe dip with lavash crisps.

The Ethicurean at Trevibban Mill: Trevibban Mill vineyard, near Padstow in Cornwall, is to open a new restaurant championing vegetables and fish in partnership with Bristol’s The Ethicurean restaurant. Scheduled to open in mid-March, the 80-cover restaurant will feature “vegetable-led cooking”, while also showcasing produce from Cornish fishmongers and local farms. The vineyard’s wine range, which includes a blanc de blancs sparkling and an orange wine made from the Orion variety, will be available to pair with the dishes.

Breakfast and brunch at Folie: On 20 January, restaurant and bar Folie, located on Golden Square, London, will start offering breakfast and weekend brunch. On weekdays, the restaurant will open early for breakfast, serving up coffee courtesy of The Gentlemen Baristas and hot chocolate from Pump Street. Expect the likes of fresh pastries, coconut milk oat porridge, chickpea pancake with with black olives and herb pistou, and omelettes of ham, cheese and herbs. Weekend brunch, which features scrambled eggs with smoked salmon or sea urchin and chicken and basil croque monsieur, will be accompanied by Champagne or cocktails such as BB’s Bellini, Bloody Mary and Folie Mimosa.

Sunday kamayan at Bong Bong’s: Bong Bong’s Manila Kanteen will launch their alternative version of Sunday lunch this month – a traditional Filipino kamayan. Referring to a family-style feast in which numerous dishes are placed on the table, served on banana leaves, kamayan means ‘to eat with your hands’ in Tagalog. Dishes include creamy taro and coconut milk laing; adobo glazed cauliflower; vegetable spring rolls with banana ketchup, crispy Pata, a fragrant fried pork hock; and a whole baked tilapia with spring onion, soy and garlic.

Yoga brunches at Bombay Bustle: Bombay Bustle, on Maddox Street, London will be hosting a series of yoga bunches on Saturday mornings from 1 February. Teaming up with nearby Yogasphere, a yoga class will be followed by a three-course brunch. For brunch, guests can enjoy a glass of muneer, made with coconut water, honey and lime. To start will be winter vegetable soup of spiced parsnip, tenderstem broccoli and zucchini crisps followed by a selection of mains including Malabar pepper tofu with wild rice bisebelle, edamame beans, lentil risotto and fresh turmeric; cauliflower corn patties with mesclun greens and a yoghurt relish; or fragrant Malwani trout with spiced flattened rice, fish curry and beans poriyal. The brunch will end with rose with raspberry yoghurt barks, and a cleansing glass of fresh mint tea.

Pasta making glasses at Officina 00: Officina 00 in Old Street will be launching past-making masterclasses from 18 January. Held every Saturday, guests will be led by head chef and co-founder Elia Sebregondi. On offer are Introduction classes for beginners; Filled Pasta, where attendees will learn how to make occhi and raviolo fritto; and Our Own Touch for true pasta aficionados.