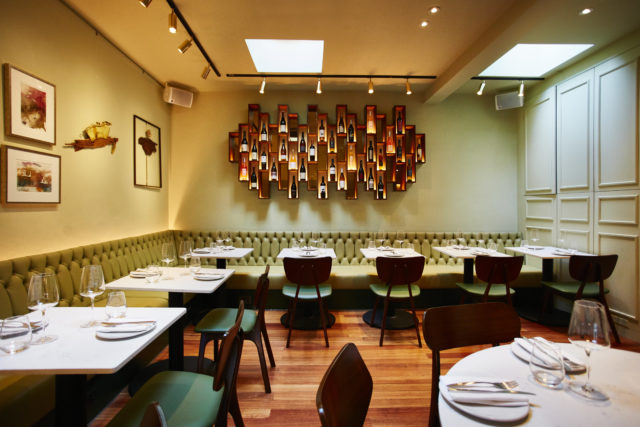 The concept: Perhaps it’s ‘The Durrells’ effect, but the Greek islands are definitely having a moment in the UK. While Brits have long flocked to Crete and Corfu, lesser known islands like Milos, Tinos and Sifnos are becoming increasingly popular with travellers keen to keep away from the crowds of Santorini and Mykonos.

The Greek islands offer beleaguered Brits the promise of whitewashed villages, flappingly fresh seafood and the endless blue of the glittering Med – a sun-drenched, olive oil-fuelled, slower pace of life we all crave.

While making like the Durrells and upping sticks to a Greek island isn’t a possibility for many, Londoners can enjoy a slice of the laid-back lifestyle at Charlotte Street newcomer Ampéli.

Meaning ‘vineyard’ in Greek, wine is given equal airtime as food at the convivial venue, run by photographer Jenny Pagoni. While many have disappeared, Charlotte Street used to be famous for its Greek restaurants, so the arrival of Ampéli will help to keep that tradition alive.

The décor: Inspired by wine-focused restaurants in Athens, Ampéli is set across two levels, with a well-stocked wine bar on the ground floor and the majority of the tables on a mezzanine level. My poet friend and I were sat in a cosy olive green leather booth beside the bar that gave the impression of travelling in a vintage train carriage.

Given Pagoni’s artistic streak, the walls are dotted with works by Greek artists she’s keen to shine a light on, including watercolourist Leonie de Lange and sculptor Vasiliki Maliopoulou, who crafts works from reclaimed materials found along the Greek coastline.

Mirroring the sofas, the walls are a pale olive green. On the far wall upstairs, wine bottles are displayed in a wooden installation that wouldn’t look out of place at the Tate.

The food: Head chef Oren Goldfeld comes by way of Ottolenghi’s Nopi in Soho and Toto in Tel Aviv. Divided up into snacks, social plates and larger plates, the majority of the dishes are designed to be shared.

The tomato and goat’s cheese fritters and pickled okra tempura with Greek yoghurt are perfect for snacking on while you decide what to order. The okra tempura was particularly good, the batter light on its feet and the pickled okra offering a pleasing sourness and courgette-like crunch.

Another snack worth ordering is the decadent pea green whipped feta dip with pistachio and Aleppo pepper, served with giant crackers flecked with sesame and pumpkin seeds.

The most indulgent of the social plates is the barrel-aged feta saganaki, a gloriously plump pastry parcel filled with warm gooey feta, which came to life when doused with lemon and slathered in cherry tomato jam.

Signature dishes: Be sure to order the smoked cod’s roe with pickled jalapeños. Silky smooth and impossibly creamy, the fish flavour was sophisticated and subtle – a world away from the bright pink pots of taramasalata you find at the supermarket.

The jopser-smoked aubergine was a dish of two halves. The smoky, slightly slimy innards of the aubergine were covered in crunchy walnuts, tahini and ruby-like pomegranate seeds. Beside it lay what remained of the aubergine once its insides had been turned to pulp, like placing a fish skeleton beside your catch of the day.

Another highlight from the menu is the spiced potato burik – a giant triangular pancake filled with potato, oozing egg yolk and salty bay shrimp served with a generous dollop of smoky harissa mayo. With its Indian influences, the subtle spicing of the pancake was beautifully handled. I only wish I had more of an appetite at that point in the meal to fully appreciate it.

The drinks: One of the biggest draws of Ampéli is its Greek-only wine list compiled by Yiannis Karakasis MW, which champions the country’s native grapes.

It opens with a quartet of Greek sparkling wines and a pair of ‘new age’ retsinas aimed at Sherry lovers. There is an entire page dedicated to Assyrtiko from Santorini, Crete and the Aegean Islands, followed by a broad selection of indigenous Greek whites, including Robola and Savatiano.

The reds section flags up native grapes Agiorgitiko from the Pelopponese, Xinomavro from Naoussa, Limniona from Thessaly and Limnio from Thrace. The list also includes a couple of amphora-fermented orange wines and a quartet of sweet wines including a White Muscat from Samos and a vinsanto from Santorini.

Helpfully, Karakasis has included how to pronounce each grape variety alongside each wine. I began with a racy glass of 2018 Assyrtiko from Cretan producer Karavitakis that tasted like licking wet pebbles (in a good way). 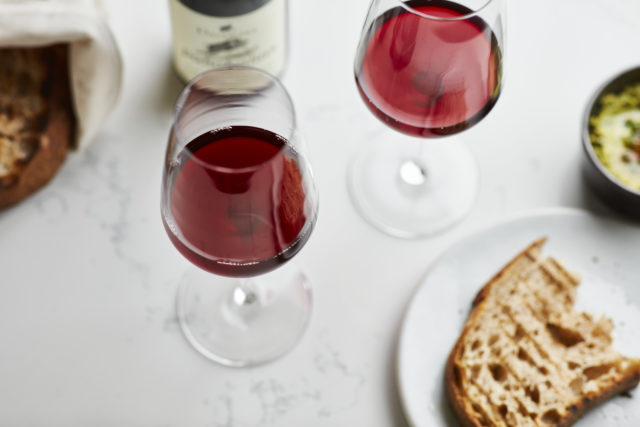 Stealing the show however, was a sprightly glass of Macedonian Xinomavro with no added sulphur that charmed with notes of sour cherries, tart raspberries and tomato leaf. Brimming with juicy fruit,  the wine was dangerously drinkable and paired perfectly with the food.

Who to know: Look out for friendly, flame-haired general manager Lorraine Abrahams, who, prior to Ampéli, spent a decade working for restaurant maestros Chris Corbin and Jeremy King. On our visit she was rocking a retro black and white polka dot dress, adding a splash of old school glamour to the room.

What could be done better: The salt cod croquettes were a tad on the dry side, while the kohlrabi with sesame and chilli oil promised to pack a punch, but was rather shy in flavour and could have done with more heat.

Last word: Ampéli is a joyful addition to Charlotte Street and has the feel of a popular haunt that has been open for years. The wine list is one of the most exciting I’ve encountered in London in a long time, and the ample by the glass offering works well with Ampéli’s sharing plates concept.

With the recent spate of restaurant closures that has rocked the capital, from The Square to Gezellig, it was heartening to see such a new restaurant packed to the rafters. Whether you swing by for a glass of Assyrtiko and a spiced potato burik, or bed in for a full-on feast, it’s hard not to be charmed by this sparky newcomer.