We round up the week’s hospitality news, from Mexican restaurant chain Wahaca appointing advisors at PwC to the concerns many restaurateurs share about re-opening with restrictions still in place. 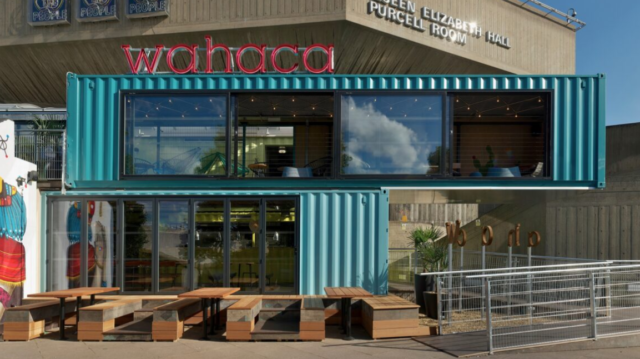 Ipsos Mori: A survey by Ipsos Mori has revealed that three in five (61%) Britons would feel uncomfortable using public transport or going to bars and restaurants, while three in 10 (29%) feel comfortable going out to eat and drink. Young people are most comfortable with the idea of dining out, with 36% of 18-34-year olds saying they would resume dining out, compared to only 22% of 55-75s. Ipsos Mori polled 1,066 Brits aged between 18 and 75 online between 24 April and 27 April 2020.

Wahaca: As reported by Sky News, Mexican restaurant chain Wahaca, co-founded by MasterChef winner Thomasina Miers, has appointed advisors at PricewaterhouseCoopers (PwC) to review its finances amid the Covid-19 pandemic. The restaurant chain has a total of 25 restaurants in the UK and employs around 1,000 people. Miers previously told the Mail on Sunday that around 50% of hospitality businesses could fold, with a total of two million jobs lost, if the industry does not receive more support.

Table spacing concerns: A number of UK restaurateurs have expressed concern about the viability of re-opening with fewer tables, spaced further apart. As reported by The Guardian, Russell Norman of Polpo group said that the two-metre rule would result in the remove of two-thirds of seats from his restaurants, which would be financially unfeasible for the business. Gary Usher of Elite Bistros, the group behind Kala, Sticky Walnut, Pinion, Wreckfish, Hispi and Burnt Truffle, agreed that it wouldn’t work. “We have done forecasts on opening with just 50% of the pre-Covid trade. We’d survive for three months and then go bust,” he said. Will Beckett of steak chain Hawksmoor said that re-opening during the public health emergency would do “long-term damage” to the hospitality industry.

Five areas that need to be addressed: On 19 April, UK cabinet minister Michael Gove warned that pubs, bars and restaurants would be “among the last” to re-open when lockdown restrictions are relaxed. Later in the week, Kate Nicholls, the chief executive of trade body UK Hospitality, addressed the House of Commons Treasury Select Committee, outlining five key areas that she believed need to be addressed. These included an extension of the rent holiday, a way of helping those not covered by the Job Retention Scheme, issues with the grants scheme, frustration with the Coronavirus Business Interruption Loan Scheme (CBILS), and the fact that 71% of hospitality businesses had insurance claims rejected.

Salon: The team behind Salon in Brixton have launched a contact-less delivery service, with a selection of four mixed wine cases to chose from. These include ‘Fun’: six easy drinking, accessible wines (£70); ‘Juicy’: six characterful and vibrant wines (£90); ‘Strictly Bangers’: six bottles of the team’s favourites that they’re currently drinking (£120) and ‘Off the charts’: six “iconic, elegant wines that are full of class and finesse” (£210). Upon request, the team will tailor the wine selection to the taste and preferences of the buyer. Orders can be made by emailing info@salonwinestore.co.uk

Help 4 Hospitality: Industry initiative Help 4 Hospitality has set the goal of raising £250,000 by 1 August to provide financial support for the sector. Established by Berkmann Wine Cellars, Help 4 Hospitality features an online shop delivering wines directly to the consumer, and donating 12.5% of the money to a consumer-nominated hospitality outlet, or charities including The Drinks Trust and Hospitality Action. There are now over 600 outlets signed up to the programme. To find out more, click here.

67 Pall Mall: London members’ club for wine lovers, 67 Pall Mall, has launched a virtual membership option for £10 following on from the success of its online masterclasses. Virtual members will receive details of upcoming tastings, and if they miss a masterclass, they have the option of watching the recorded sessions. They can also order tasting kits which consist of 75ml servings of each wine.

Cornwall Community Kitchen: The Cornwall Community Kitchen, a collaboration between caterer Fee’s Food and chef Tim Speeding is helping to provide food for vulnerable people in the area. The initiative has been donating meals prepared by volunteers to food banks based in Wadebridge and Bude as well as DISC Newquay. It is also supporting local suppliers, farmers, and fishermen, which have been impacted by the closure of restaurants and hotels.

Benares: London-based fine dining Indian restaurant Benares has partnered with Market Financial Solutions (MFS) to offer free meals for NHS staff. MFS will jointly donate the funds to cover the costs of the meals. Benares is one of a number of restaurants in the capital that has remained open and is offering takeaways and deliveries. Now for every takeaway order it receives, it will donate one meal to NHS workers in the local area. Food packages will be delivered to Hammersmith, Charing Cross, Chelsea & Westminster and St Mary’s (Paddington) hospitals as well as local NHS medical centres in Mayfair, Knightsbridge and Victoria.

Small Beer Brew Co.: Bermondsey-based Small Beer Brew Co. has launched an on-trade initiative called Small Acts of Kindness. It has extended its campaign to feature a ‘hospitality edition’, inviting anyone in the industry to nominate a friend or colleague that has been a source of reassurance during the pandemic. Small Beer is donating 50 cases of beer for winning nominees. All entries can be submitted here.

Hattingley Valley: Hampshire-based winery Hattingley Valley has revealed the success of its hospitality fundraising initiative. It has raised £1,000 for Hospitality Action and a further £1,000 to support its restaurant partners, which include The Oystermen, the London Shell Co, and The Chesil Rectory. It has also sent out a number of bottles to members of the industry as part of its Hattingley Hero initiative. Following the launch of its new still rosé, it will be donating £12 for every case sold towards a £100 voucher for use in the restaurants it works with. For every eight cases bought, customers will be put into the draw to win.

Prime Feast: The CGC restaurant group, consisting of Goodman, Beast and Zelman Meats has teamed up with sister company Burger & Lobster to launch a new brand called Prime Feast. Prime Feast consists of luxury meat boxes, delivered through out London and the home counties. There is also an option to upgrade a box to be filled with Beasts’ king crab legs, as well as wines, charcoal, the Goodman cookbook, knives and other merchandise. The box also includes Burger & Lobster burger kits, herbs and a selection of sauces.